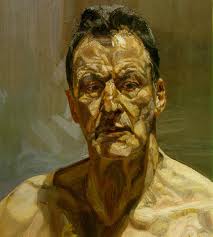 One of the hottest art shows on view right now is the Lucian Freud “Portraits”  retrospective at the National Portrait Gallery in London. The museum is offering extended hours for this exhibition because of enormous ticket sales.  “Portraits” includes 130 of Freud’s works, some of which were owned privately and have not been seen in public.

Some consider Freud to be one of the most important recent artist working with the figure. He died in July of 2011 at the age of 88. His paintings have fetched millions at auction, with a portrait of a nude lying on sofa going for $33.6 million in 2008 – then a world record for a work by a living artist.

‘I’ve always wanted to create drama in my pictures, which is why I paint people. It’s people who have brought drama to pictures from the beginning. The simplest human gestures tell stories.’ -Lucian Freud

An interesting critic of Freud’s work was in the Nation in August 2011 “The Democratic paintbrush of Lucian Freud” : Some of Lucian Freud’s critics claim that his portraits—especially his naked portraits—dehumanize the sitters, that the light that glares down on their faces and bodies might be more appropriate for a police interrogation or an autopsy, that Freud’s paintbrush reduced the models’ flesh to bags of bones, or else yeasted it up like dough that spills or flops across unsavory surfaces: scruffy couches, crusty mattresses, rag heaps, bare floors….Those critics who called Lucian Freud shameless were, in fact, right on the money. He painted to do away with shame—the kind that cherishes certain bodily stories and banishes others. He made the case that no body type inherently possesses more capacity to compel and spellbind than another.http://www.thenation.com/article/162471/democratic-paintbrush-lucian-freud

To learn more about this intriguing exhibition, here is the link to the National Gallery. The show runs unitl May, 2012.

Also, check out this great article from Vanity Fair in which David Kamp interviews people who sat for Freud:  http://www.vanityfair.com/culture/2012/02/freud-201202